How Diabetes Tooth Loss May Be Hurting You

The Link Between Diabetes and Tooth Loss

This fall marks the third year since November was declared National Diabetes Month via a 2016 Presidential Proclamation. With approximately 1.5 million new cases of diabetes diagnosed annually, the need to raise awareness about diabetes throughout the United States is clear.

Typical symptoms of diabetes include:

However, it’s less commonly known that diabetes can affect dental health, for example, by causing diabetes tooth loss. A 2017 study by the University of Pennsylvania revealed the extent to which the oral microbiome is affected by diabetes. Mice with diabetes experienced a sizable increase in the number of harmful bacteria inhabiting their mouths, which led to inflammation and bone loss. They had periodontitis and increased levels of IL-17, a molecule that is important in immune response. High levels of IL-17 are associated with periodontal disease in human beings.

The study demonstrates how diabetes can cause changes in oral bacteria which drive inflammation and bone loss. According to the authors, glycemic control and good oral hygiene significantly decrease the risk of periodontitis in people with diabetes.

How Does Diabetes Affect Your Teeth?

If you or a loved one is living with diabetes, then you’re probably familiar with the common practices used to manage the disease. Even so, it’s possible to overlook the oral health conditions often associated with diabetes. The important thing to remember is that improved oral health has a positive effect on the disease, and vice-versa. 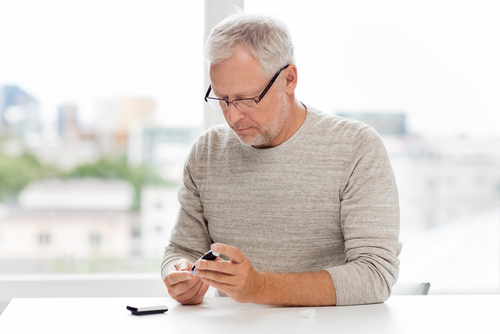 These warning signs may indicate that your oral health is suffering due to diabetes, whether or not it has been diagnosed:

Diabetes affects the body’s ability to process sugar, specifically as a result of insulin deficiency. Insulin is responsible for carrying sugar to the cells in the body. When insulin is not produced in sufficient amounts, glucose becomes more concentrated in the blood. High blood sugar levels have damaging effects on major body systems, including the oral cavity. Diabetics have the additional problem of a depressed immune system, which makes it harder for the body to fight off bacteria. That means a build-up of plaque, which leads to a higher incidence of cavities and gum disease.

Emerging evidence shows the two-way relationship between periodontitis and diabetes. Diabetes increases the risk for periodontitis for the reasons stated above, while gum inflammation also negatively impacts on glycemic control and thus the trajectory of diabetes. Patients with severe periodontitis are three times more likely to suffer end-stage renal disease and are at much greater risk for heart disease.

Because of this strong relationship between periodontitis and diabetes, diabetic self-care should include oral hygiene strategies:

How Can A Dentist Help With Diabetes Tooth Loss?

Gum disease often leads to diabetes tooth loss, which can cause many associated problems. The good news is that you don’t have to face these diabetic problems alone.

A good dental team can identify the signs of undiagnosed diabetes and offer targeted preventive care. Every diabetic should have the support of a highly qualified dentist with knowledge about the relationship between diabetes and oral health. Penn Dental Medicine (PDM) can coordinate with your other physicians to ensure continuity within a full spectrum of care. Our goal is to help you live the healthiest life possible, without the additional dental complications that diabetes can bring.

Penn Dental Medicine provides dental care at an affordable price. To set up your first appointment at PDM, please give us a call at 215-898-8965.

How to Fix a Chipped Tooth: Five Possible Ways

How to Find an Affordable Dentist in PA

5 Reasons to Choose Treatment at Dental Schools That Take Patients